If you are using the main C++ distribution of wxWidgets, Feel free to ask any question related to wxWidgets development here. This means questions regarding to C++ and wxWidgets, not compile problems.
Post Reply
6 posts • Page 1 of 1

I'm normally pretty good at being able to find answers via Google, but when it comes to understanding sizers I'm hitting a brick wall. I've read every tutorial and guide on sizers that I can find but I'm either overlooking something or there's something missing from them.

What I've got so far is this: 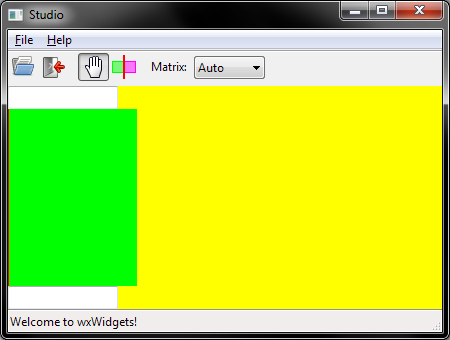 It's hard to see but there is 1px wide red panel to the left of the green panel.

My main Frame (yellow) has a vertical BoxSizer, to which I add a text control, a horizontal BoxSizer containing two panels (red and green), and another text control:

Is there some concept I'm missing here? Is wxPanel the wrong thing to use? Does hSizer need something doing to it to make its children fill its whole width?
Top

In such cases usually much easier use some RAD tool like wxFormBuilder.

As for here replace

Ah, I just figured that out one minute after you posted, I swear! Not that I exactly get how it works, but it works.

I'll look into wxFormBuilder, too, although this is going to be a pretty simple program and I had enough problems just trying to use a PNG resource...

I disagree about using a GUI editor in this case, because if you don't know how sizers work in principle, you won't get any further than trial-and-error either. The trial-and-error will just be a little faster

You say you've read all sizer tutorials, so i assume you found this one:
http://neume.sourceforge.net/sizerdemo/
Use the source, Luke!
Top

Yes I did, thanks. I think I just hadn't made the conceptual connection that sizers could/should wxEXPAND as well.

I'm finding wxFormBuilder useful for generating C++ code which I can then pore over and understand, rather than just letting it do the work for me.
Top

there is quite easy tutorial for wx sizers, but in python notation.